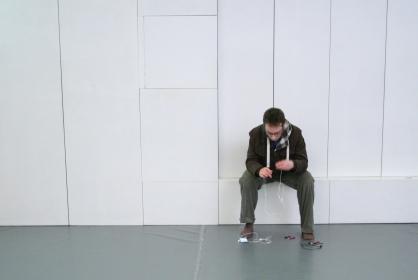 We are a team of artists directed by Hannah Bruce, working with sound, movement, technology and light. In, around, and with architecture, we create bespoke atmospheric encounters which encourage visitors to engage with unique places. We aim to inspire emotional human connections with bricks and mortar and create a dramaturgy of place. We bring you to the brink of your own history. We show you the story that’s already inside your head.

"The Look of the Thing @wiltonsmusichall does mesmerising things with bodies, words and time in a beautiful survivor space."

The venues we’ve worked in range from a family home in Hackney, to West Yorkshire Playhouse's hidden subterranean depths. We have conjured figures from the past in the National Trust property "Max Gate", danced in the cupboards of Wilton's Music Hall (Europe's only surviving Grand Music Hall), and sent shivers down the spine of visitors in Shoreditch Town Hall’s derelict basement.

As a company we always collaborate across artistic disciplines, and each commission is a journey of discovery.

"Contributing to this project has been incredibly liberating for me as a writer... In these collaborations, I am able to reconnect with the value of the individual word and image, and see how those elements of language connect with other expressions of space, movement and time." (Matt Morrison, writer)

2016: Edgelands - an interactive composition and App for the Barbican

Launching the use of bluetooth technology in an ambitious new foyer programme, the work invites visitors to reimagine the edgelands of the Barbican, seeking out the extraordinary inside a building famed for its radical design and ambition. Leave day-to-day at the door, and you’ll discover an architecture of other spaces, resounding with the echoes of its Utopian foundations. Edgelands is an interactive composition, created by Seth Scott in association with Hannah Bruce & Company, and commissioned by the Barbican. The app was developed through a University of York research grant, and supported by the Department of Music.

2015: A Collection of Small Choices - a new piece and BLE App for Hoxton Hall

Mischievous and ghostly by turns, this is not a heritage tour as you know it... We were delighted that the team at Hoxton Hall - a magical place with a tangible history - invited us to get involved with their creative approach to the future of the building. Focussing on the unique archive and historic architecture, we created a pioneering experience for visitors. Using creative tools alongside historical research, and drawing on the archive material and inspirational spaces at Hoxton Hall, we invite visitors to feel closer to the past, and let their imaginations run amok.

Hannah Bruce and Company were commissioned to make The Claim for West Yorkshire Playhouse as part of Transform 14, West Yorkshire Playhouse's festival of experimental theatre. Using the latest in digital technology audiences were invited to explore a building they thought they knew, uncover a city lost behind closed doors, and gently preserve their future dreams in an unexpected urban desert.

A 30 minute walking through Cape Town's city centre took audiences on a tour guided by their own personal guardjie calling out the city’s secret depths. ‘Cosi-Cosi’ was developed to wrap listeners in the bricks and mortar of the cityscape whilst opening their ears to the sea of voices that have long lapped Table Mountain’s slopes. A group of artists brought together through an AIDF grant (see below) responded to contemporary observations and experiences of the city told by Cape Town’s archetypal urban watchers - taxi drivers, guardjies, parking marshals, street sweepers, stall holders and shop workers.

A bespoke site-responsive journey made for Darlington, this piece tracked imagination and memory through the streets of the town. Piloting an innovative approach to interpreting the dramatic history of Darlington's Market Hall, the work formed a very personal experience for a limited number of people, and included development with Strong Voices NE.

Hannah co-directed Some Reflections with Sam Lawrence, a pilot project that focussed on heritage interpretation using performance. This pilot was the result of a partnership between The National Trust and Bath Spa University. It took place at the National Trust property Max Gate, originally home to Thomas and Emma Hardy

January 2013: The Look of the Thing (Northern Stage, Newcastle)

The Look of the Thing was runner-up for Title Pending (the Northern Stage Award for New Theatre 2012) resulting in a residency week at Northern Stage in January 2013.

October 2012: The Look of the Thing (Shoreditch Town Hall and Wilton's Music Hall)

This unique approach to integrating text, music, movement and promenade performance using the Tlott App was performed in the Oxford Samuel Beckett Theatre Trust mini-festival in October 2012, co-produced by The Barbican, CREATE and Shoreditch Town Hall. It was then re-developed and performed at Wilton's Music Hall funded using public money by Arts Council England and R&D funding from the Oxford Samuel Beckett Theatre Trust.